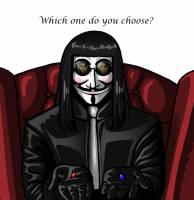 So, ah, going to try my hand here. Don't mind the donkey and... DEAR LORD!

One day you are going to ask yourself the question. Not at the moment maybe, but one day. If you lived.

You're probably not the type of person to leave stones unturned and leaves untouched. Maybe you were even the type of person to flip the stone eight times in an attempt to annoy the Hell out of said unmoving object. However, at the moment your eyes were rather stung, and the annoying buzz in your head wasn't making your current predicament any more clear.

Oh, you remember a fairly distant night, probably half a day or so from before, with the full moon and the bustling bar all around you; your environment, this one place where you were most comfortable. Everything else after was fuzzy; it just made the buzzing sound in your head worse.

Back to the topic at hand. Only this time, let's ask the question now.

It's only been a half a second since your previous thought.

So why WERE you leaping off a hundred-foot waterfall with no parachute, with a screaming little catgirl with two tails tucked underneath one arm, a crate of nitroglycerin, a grappling hook, a cracked bottle of expensive sake, half-a-stick of dynamite, a justifiably charred tankoubon of Naruto, a pornographic magazine and... oh, a yaoi anime DVD cover (Can't make out the title)?

Oh, and there were almost a dozen floating women blasting lasers at you from above while you were flipping them the bird with your free hand.

One of them hit your head with a bottle of Yebisu beer! Maybe it's a clue~!

Wait a minute, you HATE Yebisu!

It therefore... CANNOT be a clue!

The catgirl is screaming loudly. Of course it would be loud. She's screaming. You're less than sixty feet from the rocks below. Seeing the grappling hook, you contemplate awesomeness by using said catgirl as a pick, but decide against it. She might lead you to the Lost City of Kamina City Which Was Once Lost one day, perhaps! The possibility of using her as a yo-yo is thrown out the window when you realise you're much more awesome than that.

'Of course, I must be more awesome than to use such a fine future asset as a Yo-yo!'

'Don't fret, my darling future loli cat asset, I shall GAR us to safety!'

And fifty feet from the bottom, you begin.

The women above are screaming obscenities; one of them is crying her eyes out as she launches her blue fireballs at you.

Forty-five feet. The catgirl loli is scratching you and screaming and crying. She must be worried you would be hurt! No! You cannot let her worry; catgirl loli is future asset and to be protected as such!

'Steel is my body and fire is my blood.'

Forty-feet. Catgirl loli is begging you to release her. It must be because she doesn't want you to see her cry! It's so sweet of her...

'I have created over a thousand blades.'

Thirty-five feet. Catgirl loli bites you. How she must love you so~!

Thirty feet. The yaoi anime is revealed to be Boku no Pico. That probably explains the slight amnesia.

'Nor known to Life.'

Twenty-five feet. The woman above you that was crying apparently has nine tails. Your pants become too tight. It only further proves that you are manly.

'Have withstood pain to create many weapons.'

Twenty feet. The rocks and water below seem to tremble before you.

'Yet, those hands will never hold anything.'

Fifteen feet. The crying woman comes for you. She must have noticed how hot you were!

Ten feet. Your chant is complete.

...And turns catgirl loli into a rocket booster, complete with Final Fusion Music.

...Which propels you into a headbutt with said nine-tailed woman.

Your consciousness fades quickly, But not quickly enough. You have one last action to do. It is all-important and imperative to be completed.

GARliness is no excuse for violating common sense.

Where's our one-liner? We need a one-liner.

Also, this is interesting, starting in a crazy awesome position.

So how did we get in this position?

Like, you can expect bots and spiders to get your address and spam it.

The raging eyes of said nine-tailed woman say it all. Your hiney-senses tingle in recognition. Either this woman was a very dangerous assassin or a Yaoi fangirl of the highest order. She might even be both! Your consciousness is fading faster and faster, the thick skull of said woman has done considerable damage to your own, and that was saying a lot!

Her face contorts with the utmost hate, and you come to the conclusion... that catgirl loli needs a new name. It was of the utmost importance, of the utmost priority of the utmost immediate attention. Also, you think that the word “utmost” will never be overrated. Like cottage cheese. And pink bazookas. They just need a chance.

You quickly deduce that these two must have Pokemon Syndrome and the names are terrible. You decide to rename the fox-tailed woman too, while you're at it. Maybe tomorrow. You wonder if Gundam Heavyarms is legally taken. It'd make an awesome name.

'Catgirl loli, you are now known as Ranka Lee!'

They stare blankly. Poor lower life-forms. The internet must be slow in their area. Undeterred, you continue in mid-fall.

'Nyanroll is demanded! Make it so!'

Foxtail girl tries to claw you with both hands. You know Kung-Fu. You show her.

Okay, you don't know Kung Fu. You can just punch really, really hard. Which is almost as good for Kung-Fu. Your left swing meets both her hands, which seem to have long fingernails. You almost frown. Apparently, long fingernails are a turn-off for you, because your pants no longer feel tight. Your train of thought travels to the pair of fox-ears she's sporting. To the tails. And back to the fingernails.

Not sure if want.

You vow to love her and make beautiful children together anyway, whether she wants it or not.

Then again, it seems as though the water and jagged stones would interfere with any further progression.

As the three of you plummeted to the rocks below, your left elbow and hand in an awesome deadlock with said claws, your expression turns into a perfect deadpan.

You pull out black sunglasses from nowhere.

>>125517
I liked it until Joe started sexing up everything BUT his beloved and faithful wife. Now I'm just ashamed to see the story continue, as the anon who wrote in the "marry her immediately" option in the first place.