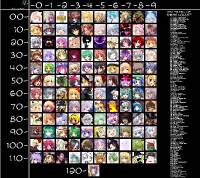 Nanaya (Naya)
Real name: Unknown (could be Jarrett)
Occupation: Protagonist, resident psycho killer of Hakurei
Age: ?? (university student - probably around 20 or so)
Traits: Knife proficiency, short reaction time, instinctive reflexes
Psychological portrait:
A nice, outgoing guy most of the time. Proven to like playing pranks on people and adventuring in general. Has a hidden personality that manifests itself as a voice in his head. Sometimes it takes control over his body for short amounts of time.
Quotes:
"I'm the spider webbing in the darkness."
"BEER FOR THE BEER GODS!"
"That's it, Morichika. Ten paces, no magicks, no flying, bare chests only, FINAL DESTINATION!"

Reimu Hakurei (Reimu) - friend, possible love interest
Real name: Reimu Hakurei
Occupation: Shrine Maiden of Hakurei
Age: ?? (teenager)
Traits: Sealing/Purification powers, proficiency in danmaku, flying
Psychological portrait:
Considered lazy, egoistic and hostile by most of Gensokyans. While she may appear so from the outside, it's but a facade she puts up so that people won't view her as 'weak'. She is afraid of losing that bad fame, due to the fact of her being the one responsible for Gensokyo's security. She likes Nanaya whom she has saved from getting killed by a youkai soon after he entered Gensokyo. She's jealous of Suika, who seems to have a closer relationship with Nanaya (going as close as molesting her and almost having sex). Hostile and bossy at daytime, she seems to grow weaker and more clingy as night approaches. Could it be that she's afraid of darkness?
Quotes:
"Less whimpin, more talkin! Get to the point!"
"Too bad I failed at it today. I let my guard down in front of you. Silly me."
"Goddamnit, Nanaya! You're gonna kiss me or not?!"

Sexual encounters: 1 (foreplay), another one pending


Suika Ibuki (Suika, "my oni" as Nanaya calls her) - drinking\adventuring buddy, possible love interest
Real name: Suika Ibuki
Occupation: Resident oni of Gensokyo
Age: ?? (OVER NINE FUCKING THOUSAND JESUS CHRIST, though she still has a body of 10 years old)
Traits: Manipulation of density, flying, superior strength
Psychological portrait:
Childish, outgoing, has a great sense of humour. Likes playing pranks on people and alcohol. While she feels fondness for Nanaya, she's not sure what it means. Is it because it felt so good when he touched her or because he's so fun to be around? And what is that stinging in her chest every time he's with other girls?
While acting childish, she's still able to become serious when the situation calls for it. It's better not to stand on her way when that happens.
Quotes:
"Boo, how stupid of me! To get beaten like that!"
"Don't call me cute! I'm an oni, you know! You ought to be scared of me!"
"I'm the oni that's webbing in the darkness! I say I was the one who killed that mugger and I want a prize!"
"ANYBODY UP FOR SOME PERCENTS?!"


Mima (Mima) - acquaintance, hot MILF
Real name: Mima
Occupation: Deity of Hakurei shrine
Age: ?? (she's a ghost goddamnit)
Traits: flying, superior strength, other powers unknown
Psychological portrait:
Carefree, outgoing ghost who considers herself the deity of Hakurei shrine. While there haven't been many encounters with Nanaya and her, she's showed that she doesn't mind him living in the shrine and fooling around with it's inhabitants (namely Reimu and Suika).
Quotes:
"Unacceptable! As the deity of Hakurei Shrine, I command you to drink more!"
"Enjoying yourself, young man?"
"I see Suika's found somone equally perverted. Oh, ho, why have you stopped? Continue, continue!"
"BOOZE!"


Alice Margatroid (Ali-- I mean MISS Alice) - acquaintance, possible love interest, possible dead end
Real name: Alice Margatroid
Occupation: Magician doll maker
Age: ?? (youkai)
Traits: flying, strength, ability to control her dolls and use them as her eyes and ears
Psychological portrait:
Alic-- MISS Alice is a shy, a bit self-centered youkai who lives in the forest of magic. She loves Marisa, who is oblivious to her feelings. Doesn't like Nanaya because she thinks he's trying to steal Marisa from her. But it felt so good when he kissed her... And she's a good kisser herself.
Quotes:
"I don't like ya, boy."
"Ima talkin about MY MARISA! I saw how you look at her. Your eyes were emanating with dirty thoughts!"
"I-if you were ever to do those things to Marisa... Like... licking her breasts, or... with your fingers... uh... Anyways, I'm not letting you play with her naked bo--unh!?"

Marisa Kirisame (Marisa) - acquaintance, possible drinking buddy
Real name: Marisa Kirisame
Occupation: Witch
Age: ?? (about the same as Reimu)
Traits: flying, danmaku proficiency, power of LOVE
Psychological portrait:
Incredibly cheerful and outgoing. Doesn't care if it's someone she just met, everyone is her friend. Loves alcohol. Pretty confident about herself.
Quotes:
"DIDYA HEAR THAT, MIMA?! SHE DOESSSSHHN'T WANT GET GET DRUNK!"
"And we're ABSOLUTELY CRAZY about it! Suika, bring the drinks!"
"BOOZE!"


Wriggle Nightbug (Wriggle) - enemy, possible future friend
Real name: Wriggle Nightbug
Occupation: Bug Youkai
Age: ?? (youkai)
Traits: flying, strength, manipulation of insects
Psychological portrait:
Human-eating youkai. Hostile to both humans and other youkai, she seems to lead a life of a loner. Pretty full of herself, until Nanaya killed her. After reincarnating, she seeked a revenge, only to get killed for the second time, which made her fall into an abyss of despair.
Quotes:
"How about a rematch, mister murderer?"
"Huh, so it has come to it again. Well, then I'll at least take you with me."
"I want to... Rip your arms off. Pierce your stomach and take out all of your intestines. I want to bathe in your blood as I chew on your brain and play with your shattered bones! That's not what you call 'killing', now is it?"


Hieda no Akyu (Akyu) - fleeting acquaintance (TS), love interest (AAA)
Real name: Hieda no Akyu
Occupation: Writer
Age: ?? (somewhere between 10 and 16)
Psychological portrait:
Shy, easily scared, extremely tsundere. In AAA, she is forced to go on a date with Nanaya, which reveals her hidden clingy side, while she tries to keep her act tough. No significiant events in TS, besides giving Nanaya money for taking care of the mugger.
Quotes:
"I-I know someone who will repair this door free of charge! Don't worry about it! I... I think you're a nice person, so... D-don't get any strange ideas! I-it's just a premonition!"
"So just take it! Buy her a present... Or some clothes or something!"

Rinnosuke Morichika - rival for Reimu's heart
Real name: Rinnosuke Morichika
Occupation: Shopkeeper of Kourindou
Age: ?? (youkai)
Traits: superhuman strength, ability to tell things' purpose by just seeing it
Psychological portrait:
While he's well-mannered and honest most of the time, if it comes to Reimu, he reveals his true, manly, manly side. Inexperienced at fighting, but his superhuman strength places him at the same level as Nanaya.
Quotes:
"No offense taken. That was a good fight. One more second and you'd have won. You really tired me out
"Ah, I don't mind being called uptight. I think it gives a... serious feeling to my personality. Come to think of it..."
"He broke into my house. He criticized my tea. He accused me of flirting with an innocent girl." (oh, I've chosen my words carefully, perhaps he should've done the same etc etc)

Fights: 1 (smashed his face with TYRANT RAVE, then finished with elbow to stomach plus an uppercut)


Shop clerk (that fucking furfag) - eternal enemy
Real name: You don't want to know
Occupation: clothes store clerk
Age: Who the fuck cares
Traits: perversion
Psychological portrait:
Gay fetishist from the human village. Not being sure about his own gender, he dresses in women's clothes. Makes fursuits as a hobby.
Quotes:
"Perfect! Amazing! Marvelous!"
"Goodness! You're aiming low, aren't you!"
"FA-BU-LOUS! It REALLY was made for you! It fits perfectly!"
"Non, non! It's HA-DO GAI! You have to say it with more emotion!"

Decided to do this instead of serious stuff because I need a nap. BADLY. Guess why?

Anyways, there will be updates today, though later than I previously said.

Anon kissed her in AAA and you counted previous kissing (such as Alice) as a sexual encounter.

BS. We're already halfway to the harem route as it is, what with Reimu apparently not caring that we're fooling around with both her and Suika at the same time. Suika's a little jealous, it seems, but we can curb that easily enough if we're quick about it. With those two down, we just need to rope in Mima; that shouldn't be too difficult, since she apparently enjoyed watching us molest Suika. Granted, we might need a little more interaction with Mima before we can really convince her, but we can do it.

I dunno, he raises a pretty good point in that we did pretty much tell her staight out. She just needs to learn to love the oni too.

A) Get Reimu and Suika to FIGHT FOR OUR LOVE

Hey, doing those charts would be a pain, that's the only reason why I didn't make them.

I was kidding too. Just like you, this blood typesizesshit stuff pisses me off.
Anonymous  2008/05/08 (Thu) 05:10 No. 3197
>>3186
Well, it's only natural. Nanayanon would be a total prick to anyone he considered competition too. Or, if his competition's female, he'd try and get them both into his harem.
Anonymous  2008/05/08 (Thu) 05:33 No. 3201
>>3197
True enough. I guess it's just the virtue of being the protagonist that prevents me from getting annoyed by 'ol Jarret (that and, you know, we make him do what he does). The rage was a bit mis-termed since I'm hoping we can persuade Kourin to go after a nice youkai girl (maybe get him an Alice/Marisa combo) and be Rinno-dude.