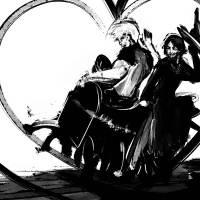 I DON'T KNOW WHAT I'M DOING

I open my hand, revealing that the coin is gone. There's a surprised shout of glee from beside me; Cirno again, wings of crystalline ice glimmering agitatedly behind her back. She looks caught up in something between a mixture of awe and dangerous interest.

A meaty palm slaps the table, rattling our mugs. "Horse-fuckin"-shit. Do it again. I wasn't ready that time!"

"he's glaring a hole through my empty palm, eyes abominably wide. I swear I can count his capillaries- that can't be healthy, right?

I comply in the shittiest way possible, plucking a quarter out from behind the startled fairy's ear, leaving her gasping and him on the verge of apoplexy. My smirk stretches just a little bit wider.

But let's back up a ways.

I tug at the collar of my shirt, more out of habit than from some hope for relief. The damp fabric peels away from my skin, drenched with sweat and summer sunlight. Watch reads 12:35 behind the sheer white glare.

The screaming of cicadas. Aimless chatter. The street isn't packed, but it's still crowded with the stink of people in this shimmering heat. They weave around me absently, never coming too close- just over six feet of sturdy Scandinavian is far from the norm even in this senseless demigod funhouse.

Have I mentioned it's hot? Because it's fucking hot.

A keening wail of laughter, like a sparkle of ice shattering through the air, followed by a cavalcade of distress and anger. Something like hoofbeats, a synchronized stuttering of feet, crashing and yelling and more of that frosty laughter.

"Behind all that, something even more high-pitched, so offensive I couldn't even register it as a sound. If I had to describe it, it'd be?

"a grown man, screaming like a little girl. Definitely that. But I keep walking, since it's none of my business anyway, and I've got places to be. Important places, with ice. And liquor.

Then a trunk covered in legs hurtles through a sidewall, bucking merrily underneath a shrill blue fairy and a- a- a man wearing a dress.

In the time it takes to process this, they're barreling headlong toward me and I react on instinct. Everything goes black-

I come to being given the stink-eye by a wizard with an awful beard; the kind you'd see decorating a 30-something who plays DnD by himself in his parents? bomb shelter. The look is only enhanced by the beautiful shiner blooming across half his grimy face, hair matted down in a clumpy rat's nest with dirt. His hat appears to be thoroughly missing.

"Who the hell punches a wizard?"

I rub at my aching ribs. My stomach's probably going to be a nasty purple-green tonight.

"Who the hell rides home decor?"

"Through the middle of town?" I add, since he looked just short of responding.

...He tries to puff himself up, look more impressive before diving into a blustery explanation, but it fails when a small blue girl- fairy"- girl settles her chin on top of his head, lounging comfortably somewhere around his shoulders. "He totally punched your skull backwards!"

She hovers off his back and spins around to face him, right at eye-level, so she can shout down his throat. Ragged icicle wings arcing from her back, unaffected by this damn awful heat.

...Ah, no wonder she looked familiar.

"You know this guy, Cirno?"

She takes the time to give McGygax over there a solid dropkick to the sternum before looking my way, sending him bowling over onto his hat. I don't recognize the language(s?) he uses, but those sound a lot like curses.

...She has to notice, right? Maybe she's more clever than we all think and she's just being a big sassy idiot on purpose?

I reach over and tweak her nose. She gives a yelp, like a small yappy dog, and immediately tries to corkscrew through the air away from my grasp. Not happening. I tug her toward me like a zero-g problem-child and give her a good rattle. "Don't avoid the question, you dope."

There's a lot of grumbling and gnashing of teeth, but another good shake (treat her like a snowglobe or a margarita, that's the ticket) and she relents, pout cracking her face in half. She definitely wasn't giggling or anything.

"he's funny! Teacher wants to- to-" she searches for a word. "Teacher wants to thump his uglies!" The bluenette looks inordinately proud of her summary.

The pile of groggy wizard (now with full hat accessorization) on the ground in front of me emits an increasingly vile stream of invective, sounding vaguely panicked. And woozy. He manages to find his feet and vehemently denies the girl in a different language I don't understand.

"Well, I guess if he has the gift of tongues?"

He whirls at me and flaps his gums, failing to produce any actual words. I can almost see the question marks buzzing around the ice fairy's head as she attempts to parse my quip.

I raise a single eyebrow and discretely check my watch. 12:50. Fifteen minutes; still noon, still way too damn hot, but the rowdy little fairy hovering nearby mitigates it somewhat. A mobile A/C unit with a blabbermouth.

"Look man, I don't mind if you're hot for teacher, but you ran me over and I punched you in the face. I think we owe each other a drink."

Cirno frowns at us over her empty glass, a cloud of vodka cubes twirling in front of her. Pyramid, rhombus, trapezoid. Dodecahedron, cylinder, spheroid. The frown fades as she begins making even more abstract shapes, poking and prodding with her fingertips now and again.

I can't even describe that one. She picks out a cube and tosses it in her craw. Crunch, munch, shatter. She downs it like candy.

I take a slug of my whiskey; it goes down like a knot of molten razor-blades, oddly enough. Just to be sure, I take another. I can almost hear my throat peeling apart, liquor settling in my gut with a virulent hiss.

His expression collapses into frustrated rage like a sad trombone.

"Look, man, I don't know how wizards drink or nothin"- I'm no wizardologist- but pissing around with my booze isn't getting you drunk any faster."

His response is a great big rictus grin; it just goes shattering across that clown mask he calls a face, all perfect teeth and aborted facial hair. Wizards must have great dental. Then comes the barking laughter, just these raggedy hiccoughs of amusement, and he's pounding the table for air.

son of a bitch

"And you didn't think the doll shit was- was- was- funky?" he's completely hosed now, cheeks red and hat on backwards- don't ask me how I can tell when a conical hat is backwards, call it a gut instinct. At some point we moved to the bar and left Cirno to her own devices, but she could take everybody in the bar and win so she'll be fine.

I take another long drink, draining my tumbler of whiskey. This is probably way too many. One too many. A dozen too?"

How to best express? Come on. Come on come on, I know I've got a clever bone somewhere in this body of mine.

Have you ever had a girl ask you to fuck her while she's folded up in a box?"

The faceless bartender picks his glass back up from where he dropped it, polishing the nonexistent grime off.

it's an emotional goodbye; really it is. Parting's such sweet sorrow, and all that. I'm waving tearfully into the wind, a fifth of whiskey serving as cold comfort in my hands. I bid farewell to my first real drinking buddy with no underlying sexual tension, all three of him. One of him.

he's crying these great big crocodile bitch-tears, melodramatic and fake as all get-out, just sobbing into a pair of white cotton panties I nicked off our waitress. The trunk lends an air of tragic gravitas to the scene, trundling into the sunset with a sleepy fairy dangling halfway out of its mouth.

I never did get his name, but in the end, names don't really matter, do they?

I soldier on through the busy afternoon streets. The crowds filter around me, a bubble of air in a river of people pretending not to see anything. Cicadas and discomfited susurrus, fading in with the heat as it shimmers into my bones.

I pick at the fabric of my shirt, clinging dismally tight.

Christ. it's too damn hot.

Bustle casually through the clinic door, electronic chime ringing in my eyes and setting my teeth on edge. it's way too jarring, like I decided to just casually jump through time because I a bottle of Tylenol. Hate bubbles up and out and over.

"One of these days, I'm going to break that thing. I swear to God, Reisen."

She brushes a lock of lavender hair out of her face with a quiet scoff, but doesn't look up. All this time, and I still don't know what the hell magazine that is. They've got tablets, you know, over at the Eientei. Lightyears ahead of the modern stuff, practically magic, and here she is with another magazine published by fuck-knows who.

"Sure you will." She does that thing you see in films, or in TV-shows - that overdramatic page turn where you lick a finger and flick over to the next page.

Maybe it's from the moon?"

NO, STOVE, DON'T WRITE, STOVE, IT'S NOT LIKE YOU NEVER UPDATE AND THEY'RE NOT PRETTY GODDAMN GOOD WHEN YOU ACTUALLY DO WRITE, NO.