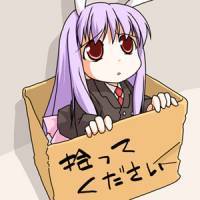 [X] Track down Remilia, show her the letter, and beg her to alter fate.

You knew this was a bad idea. You knew it, and you still did it. It just seemed like a better idea than the bind you're in already. Better the devil you know, than the fairies that you also know, you guess.

"So you were going to kill my perfect maid. My maid, who I'll remind you, has been nothing but exceedingly kind to you. Someone who's looked out for you from time to time, who's always been willing to lend you a hand."

Remilia glares at you, and Sakuya's knife is a constant pressure at your throat. "Oh? You weren't going to?" She throws the letter down in disgust, and stands up from her chair angrily. "You weren't going to, but you've already killed someone. Was it Toyosatomimi?"

You do your best to avoid Remilia's gaze, but you can't move your head down. That knife is still there. "...Yes."

"I knew it. And you'd have done the same thing to Sakuya if I couldn't help you, wouldn't you?!"

Again your voice is a whisper. "Yes. I would have."

"You were my friend, Reisen." Her whisper in your ear is both hurt and angry. "You'd betray your friends like this?"

Your knees are beginning to hurt, being in this position and unable to move. "You don't understand."

Remilia has walked over to you, and grabs you roughly by the chin, forcing your gaze to meet hers. "Then make us understand. Explain to me why I shouldn't have her slit your throat right now."

You take a deep breath. This is going to hurt. "If... if I didn't do these things, two people very close to me... they'd be hurt. Badly."

"They'd... probably die. I'm not too clear on exactly how it would go down, but I'm almost certain they'd die."

"I have. Eirin and Kaguya working together for immortality, right?"

"Close, but not quite. Eirin and Kaguya were never actually able to create it."

Remilia's confused. "But aren't they immortal?"

"Yes. They are. But they didn't make the working Hourai Elixir. I... I kind of struck a deal so that it'd work."

"I see. And that deal holds Eirin, Kaguya, and Mokou's lives in the balance?"

"So if you broke the deal, they'd die." Remilia releases your face, and starts to pace back and forth.

"I could care less about Mokou, honestly. She was a mistake."

Remilia pauses, and looks at you. "A mistake?"

You swallow, and you feel the knife blade anew on your throat. "Mokou wasn't supposed to become immortal. Tewi was. I was... less than sufficiently specific in the bargain."

"So you've screwed up one bargain, and want to strike one with the devil, now. That hardly seems like a good option."

You cast your eyes back to the floor. "I... I didn't have any other option. And I really didn't want to hurt Sakuya. I was hoping... I was hoping you could change my fate."

"Ah. It all makes sense now. Sakuya, you can let her go. Bring us some tea, we're going to have to discuss this."

A moment later, Sakuya has returned with three steaming mugs of tea, and Remilia gestures you over to three overstuffed chairs by a fireplace.

You sit down, and Remilia flops across a second chair haphazardly, and waves to Sakuya to sit down. "Look, Reisen, I haven't even taken a look at you, and I already know I can't help you." She waves down your immediate protests and continues onward. "You entered into this by your own free will. It wasn't fate, and I can't change that."

"Plenty. Who did you strike this bargain with?"

Remilia makes a disgusted face. "Fae. Always messing around." She sits up in her chair. "Now that you say that, I think there is a way I can help."

You brighten. Maybe this wasn't the worst idea after all. "Really?"

"Yes. Faerie magic is very specific when it comes to deals and bargains. You know how your generic garden-variety fairy is weak, dumb, and pretty much just a speedbump?"

"Right. When a deal is struck, the faerie's power, um, piggybacks on your own, for lack of a better term. It resonates with your strength and theirs. This is why they can do things far beyond either your ability or theirs alone. But! This leaves a connection of sorts, between the faeries, you, and the targets of the spell. From the faeries to you to the targets, in this case, Kaguya, Eirin, and Mokou." She turns toward Sakuya. "Sakuya, be a dear, and fetch Patchouli for me. We're going to need her." Sakuya nods, and disappears in a flash. Remilia turns back towards you. "Now, I've got to ask you, Reisen. Do you want my help?"

"What does it entail?"

"Well, we're going to break the flow from the faeries to you."

"Break the flow!" But- but isn't that the magic that keeps the Hourai Elixir working?!" This is looking bad. Very bad.

"It is. But the fairies' connection to you is also how they exert their control. And I'm not very well going to let you murder my favorite maid. One way or another, this link's being broken."

"Yes. The other way, if you disagree with my methods, is to kill you. I will not hesitate to do so, Reisen. I know how attached you are to Kaguya and Eirin. If I just let you go, without fixing this, I know you'll come back, and do something stupid. You know I can. You know Sakuya could."

Remilia snaps her fingers. "Look at me." You look up. You hadn't realized you were looking at your shoes again. "Reisen. You don't have any choice in the matter. And I would have a favor from you, in return for this."

More favors. More goddamn favors. It never ends. It never fucking ends! If you weren't so sure that Remilia and Sakuya would end you, you'd leap over the table and strangle Remilia to death yourself. But you can't.

"I need an alchemist. It never was Patchouli's specialty. But you, you've been trained by the best. You even inadvertently created immortality. You would leave Eientei. You would serve me."

You don't have a choice, a small voice says in the back of your head.

Remilia waves it off. "Look, Sakuya is back with Patchouli. We will discuss this afterwards. It is not like you have any choice in the matter, anyway."

Shortly after Patchouli arrives, she's set up a thaumaturgic circle around you, with Remilia and Sakuya looking on. Patchouli yawns, and turns her bored gaze to you. "Hold still, Reisen, if you please." She waves a bit in the air at you, and you can feel a low note resonating in you. "Ah, here are the strands." She grasps in the air for something you can't see, but you know is there. "The first of three, from the faeries to you." She ties the first strand to her left index finger. The note does not change.

She grasps again with her other hand. "The second." She ties the second to her left middle finger. The note splits, divides, and is now two notes, both one octave higher than the first.

"And the last. Stop fidgeting, Reisen. I told you to hold still." She grasps the third string, and ties it to her ring finger. Suddenly, they all appear in the air, and the notes stop. She strums them once with her right hand, and a chord plays. A minor third. How very appropriate.

Remilia looks at you. "Are you ready, Reisen?"

No no no no never no but no no I couldn't she wouldn't they can't no no nonononononoI just want it all to be over ?I'm, I'm ready."

Remilia gestures to Sakuya. "If you'd do the honors. It was you they were going to use Reisen to kill, after all."

Sakuya nods. "Yes, mistress." She strides over to the midpoint of the strings, being very careful not to smudge the circle, all the while pointedly not looking at you. You look at her pleadingly, hoping she can find another way out, but you know it's hopeless.

She slices through the three strings all in one swift motion. The chord stops abruptly. And then pain, pain like you've never felt before.

The morning comes, and you're in a room. Not the one you had earlier shared with Sanae, no, this appears to be servants' quarters. Where did Sanae go, actually? Sitting on a stool next to the head of your bed is Remilia.

You start to protest again. "But I couldn't- you know I can't serve you! You know my proper place is Eientei, with Kaguya, and Eirin, and Tewi, you know, back there!" Remilia seems content to let your protests wash over her. Eventually, you run out of words.

"I have one question for you. How can you serve someone that's dead?"

The question hits you like a sack of bricks. Your face goes white, and your eyes lock directly onto Remilia's. Your voice is like razors in your throat. "You knew. You knew this would happen."

A ghost of a smile appears on the Scarlet Devil's lips. "I did."

"You lied to me. You lied when you said there was a chance this wouldn't kill them."