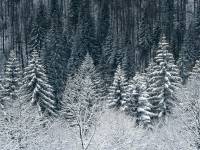 In the village of Gensokyo, there lived two woodcutters, but their names aren't relevant. At the time of which I am writing, one was an old man; and the, his apprentice, was a lad of eighteen years. Every day they went together to a forest situated about five miles from their village. On the way to that forest there is a wide lake to cross; and there is a ferry-boat. Several times a bridge was built where the ferry is; but the bridge was each time destroyed by a mysterious power. No common bridge could resist nature.

So, as I said, those two woodcutters used the ferry when they went to work, but, during a very rude winder, it happened that the boatman had gone away without waiting for them. I still don't know if it was malevolence, laziness, or something else, and I shall not waste my time conjecturing. Trapped in the snow, the two woodcutters, one being wise but weak, and the other being fool but strong, decided that the best thing would be to find a shelter, and eventually to start a fire.

Even if they found a conveniently placed shelter, they couldn't to start a fire, and each laid down, hoping for the snow storm to be over by tomorrow. The eldest one quickly fell asleep, but the younger one, being unwise, couldn't sleep, and instead, listened to the wind roaring, the snow falling, and the trees breaking under the pressure.
Growing uneasy, the young fool soon understood that he wouldn't be able to sleep at all. Not in such a place. Slowly standing, the fool walked to the edge of the shelter, and gazed upon the white hell in front of him. Surely, nothing could live in such conditions. His lips were already cracked from the cold, he couldn't feel his feet any more, and his whole body wasn't answering as quickly as it should.

And yet, the young fool stood here, staring at the Hahava in front of him. If Naraka really existed, thought the young man, it was probably looking like that. Then, by mere curiosity, the young fool started walking. Just a bit, he swore to himself, I'll just walk a bit, to see if Hahava is really like that. Losing his grip on reality, driven by the cold, the young man kept on walking, surprised by that warm feeling in his chest. He wasn't cold any more. In fact, he was warm. Or rather, he was hot. All of a sudden, he pondered, why am I wearing such heavy clothes? He started to move, removing his shirt, throwing his gloves away. He was throwing his clothes away, and yet, he was still hot!

And he realized something. He was a fool.


When the elder woke up and saw his apprentice's empty bed, he sighed, berating his young friend's foolishness. He stood, took his faggot, and start walking.
Short was his walk, until he found his young apprentice, lying half-naked among the snow. Crouching with a pained groan, the old man started shaking his stupid apprentice, ans was promptly rewarded by a sudden gasp. Shivering and yawning, the young fool woke up, only to start blabbering nonsense about a snow woman saving him from a certain death. Sceptical, the elder man looked around, seeing nobody, and promptly smacked the young fool, urging him to get his clothes back.
SettingsAppearance [X]