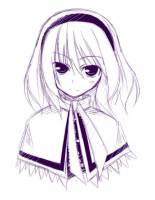 Alice Margatroid mutters these words to the wind.

"A doll never complains, and is loyal to the one that takes care of her, eh?"

Leaning towards the silvered windowpane, Alice puts one gloved hand under her chin, while the other dusts off her chalked sides. For the usual seamstress, this kind of stain is common - but for Alice Margatroid, this is a mark of how flawed extended periods of life can be - the very irony of gaining even more knowledge comes at the expense of a weakening body, at least as one ages.

The ordinary black magician was her shoulder for every time she needed someone to lean on. She suddenly remembered how they first met - it was the most unpleasant way of meeting a friend-to-be, after all. Alice Margatroid missed the yells she uttered for when her magician friend almost always broke into the same window Alice is looking at. Marisa Kirisame was not the type to enter a house properly. Yet, the seven-coloured puppeteer put up with the magician, for their one interest was common. Eventually, the rainbow opened up to the monochrome - the two sweared to be a companion to one another at all times.

"But why, of all people, did you break your promise to me?"

Alice Margatroid was left in confusion and despair. After all, she was left alone by the person she considered to be her best of friends, her companion, and her family.

Humans do not live long, after all.

Alice Margatroid felt a stream of liquid trickle from below her eyes.

"'How ungraceful for a maiden to cry like this', was these always your words, Marisa," Alice blows to the wind, "and yet, when you cry, you would say that you are not, but I would always - yes, always - wipe them off your red, gleaming eyes?"

Alice Margatroid slowly turns her back against the window and leans back to the wall below it. No, she slumps - and as time passes by, she slowly slides down the wall, until her faded blue dress touches the ground.

"But for what are my endeavors if I were to just give up and not accept my life, my losses and my shortcomings?" For what? Alice Margatroid is still Alice Margatroid - the feared seven-coloured puppeteer of the Forest of Magic.

Alice Margatroid stands up and eyes her new handiwork laid down at the brown table.
Black dress. Black hat. The broom, and of course, her trademark, the hakkero.

"You never really left me, no?"

Alice Margatroid places her hand at her chest, nearly making a button fall.

"A new morning comes after the dark - and I, Alice Margatroid, will never give up."

Or so she thought.

()Write this.
()Write something else.

[x] Whatever you want to do the most.

Really, it's up to you. Do you want write some shorts, get the hang of things? Start a CYOA? Heck, you could even write a multi-post story without votes if that's what makes you most comfortable. If you somehow mess up badly, you can always change your name and start again.

Just remember that if you're not writing for you, you may have trouble staying motivated. Write for you. If Anon enjoys your work too, that's a bonus.

But seriously, thanks. Honestly, only until now did I realize to think of myself as good and willing to get better. I need to stop this negative attitude and start to write my ass down.

To wander is my will, to be loved is what I want. But, closing my 'eye' turned me into thin, thin air.

For a second was I there, or was it an hour?

This black-haired little girl touched my yellow dress. She means no harm, I can tell. Little girls are innocent, I simply wish that this certain girl would remain innocent.

Therefore, I ruffle her black hair.

She smiles towards me, baring her two missing front teeth.

Cuteness deserves hugs, or at least that's what I see around here in Gensokyo. Tengu hugging little tengu, and even that ghost-girl hugs her companion, to the green-white's chagrin. Hmm, I feel like visiting the Netherworld. Maybe later.

Why, why do I feel something small between my shoulders and stomach? Why do I hear someone crying?

Oh no, I hugged the little girl without much thought. It seems that I made her cry.

Cries need shoulders to lean on. I kneel for a bit in front of the girl, but as I look her in the eyes, I notice a reddish patch of skin on her forehead.

There is a wound - there are scabs around it, but it is not yet fully healed. Maybe my hug scraped a bit of the scab. That hurts.

People who are hurt need help, right? I blow a bit of wind on the wound. Well, it did nothing on the wound, but the girl - the little girl is smiling again. She is very cute.

Cute things are to be ruffled.

Once more, I ruffle her hair. This little girl lifts her small arms and wraps them around me, even if those small arms barely cross each other at my back. She's warm, I can tell.

She stays hugging me for a bit, and then jumps off me. I only feel a smile on my face.

I twirl. Why did I do that?

The little girl runs away from me.

Aww, is she scared of me now? I loved her for that little while back then. Well, I could not be hated nor be loved, so what's the point?

Well, it is time to do some other things. Twirling, running around, flying. Writing.

Wait, why am I even writing a diary?

Writing from Koishi's perspective is fun, albeit hard.

It was the midsummer night
of a harsh and contradictory year , a summer where the pitter-patter of the rain upturns the ground that should be dry, lest the rain become the sun. A lady in black strolls through the puddles of the said ground, leaving trail after trail of a foot without a shoe.

An aura of grim and darkness surrounds the lady - literally. The night has become a companion for the lady - no one in the light could perceive whatever blonde or flax this lady has, nor the ribbon that ties the strands and the black and worn-down dress that wraps her body, covering a skin that barely met the sun.

Most say that the night raises one's wit, but for the lady called Rumia, the negation seems to hold true. After all, what do you call someone who cloaks herself in shadows, never expecting that self to ram a tree and not go through it?

As leaves fall like a sudden onset of autumn, Rumia shakes her head. For someone who controls darkness, not seeing in the dark is a cruel and sadistic setback to one's abilities. It is a contradiction, a dilemma, a paradox. From that one consequence she lost her prey - but as she shakes her head, she did not know whether to follow her instincts, or to be thankful that her hunt was barred by a tree.

It is, indeed, the irony of the creature of fear of the dark not being able to see in the dark.

To her, it looks like the tree served as a reminder to not disturb the ones that should be left undisturbed. Memories flooded her in her thinking, some bitter yet meaningful memories suddenly snapped back in the frame of her mind.

Of course, who would want to be punished by that red-white? Who would not remember being punished by a creature of overkill?

Rumia reminisces on her batyle with the red-white on that fateful scarlet day. To be nearly overpowered by needles, charms and talismans was never a destiny she wanted, nor to be defeated and shamed by a member of the species of her prey. After that, Rumia was warned - she was to never eat a human, be it that day, or the future.

Rumia slowly sits at the ground. A little rest from a little bump, she thought. Yet, in her heart, she thanked the spirit inside the tree. Meeting an onslaught of needles or eating an enormous amount of luminous energy is not a good dessert after a meal, she thought.

Slowly, slowly, the flax falls down on her face - and Rumia snores for a while, then dreams about the things that should never be.

I lied. I said a week, right? But three Rumia votes? Okay.

Rumia is also a character that is fun to write. Her darkness power brought me a lot of ideas for a scene, but this one struck me the most.

An exam in proving set theory is good enough for an excuse for not updating until Tuesday, right?