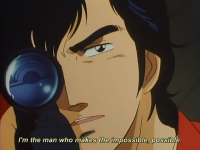 Every dirty face, every starving peasant, every lowly peon, instantly turned their attention to the new arrival. One man stood before them. Behind him, the imperial banners proudly displayed: Gold inlay and the black lion, proudly fluttering in the wind, a display of imperial power.

The crowd fell silent for a moment, completely forgetting its purpose. A dozen officers inside the besieged police building breathed for the first time in a hour, the banging on the doors having stopped.

A single voice arose from the crowd.

“They are to blame for the famine! Those men, those wicked men! They follow the emperor, serve his every whim! Direct your anger, brothers! Not at our fellow man in uniform, but those beasts who parade in men’s skin with their pompous asses, claiming to be our superiors!”

The crowd found new purpose in his words, wicked yells arising from their midst. Their anger was now concentrated solely on the Emperor’s agent, openly inviting them to come at him. He bowed, turned around, and walked into the building, the door locking behind him.

The voice emanated from your helmet, seated next to you on the railing. It was difficult to look down a scope with a solid object in between your head and the actual rifle, after all.

The man disappeared again amidst the confusion, a group of men rolling a cart of improvised weaponry in front of him. He popped up again a few seconds later, only to disappear again.

“There’s too many people, I can’t get a clean shot.”

Sway left, sway right. Shimmy a bit further down, try from the next to last story – You had already tried all those angles. The bastard was using the crowd well. You just couldn’t risk hitting someone else and giving away your involvement.

”Well, where is he? We could deploy the police right now, get him while we still have eyes on him.”

The voice paused for a moment.

“Sten, they’re in the stairwells. My position will be compromised shortly, I cannot keep their attention for much longer.”

A gap opened. A miniscule break in the crowd. Your heart stops, your breathing slows. Nothing exists besides the two of you. You draw an invisible line between the two of you, the bullet’s trajectory. Envision the hit. His body will be torn apart, even if he’s packing enhancements. 20x126mm never fails. Your finger reaches for the trigger. Just a single pull, a single action, and death.

He fears it not. Just standing there, smiling. Smiling. Mocking. Not even running. Standing.

He’s staring right at you.

Right at the only place that could hold a sniper. The only place you could get a clean shot at the center of Belcher. You picked it because that-

Oh my being… He picked it! You were never in control! This was his plan! He wants to die! He wants to be martyred!

His brow furrows. His smile turns into a frown. The shot’s not coming, the end not yet. He mouths his words.

“I will still win this.”

Righteous fury wells up inside you.

Win! Win! He said win! He thinks this is a game?! The bastard’s just playing with civilian lives like toys! Doesn’t he realize the standing orders to put down food riots are still in effect? The Dawn’s Light is deployed here, for fuck’s sake! Doesn’t he know the slaughter that you could perpetuate at a moment’s notice? A thousand nuclear suns, born on this planet’s surface! The devastation that might be wrought in the name of order and subservience! The fool’s betting the lives of this entire planet!

You won’t let him win this. No, no. You were taught two things:

You announce hastily to your comrade in arms. You accidentally knock your helmet off the ledge as you scramble off it back onto the roof to retrieve your bag.

His voice fades as the helmet falls out of range. He’ll adapt – He’s just as good as you. Now, your bag!

You slam the bolt back, forcing a manual eject of the armor piercing round you have loaded. You slam the round into the receiver and chamber it. You quickly rush back to your position and set up again, searching for your target.

Cart, men, distractions… Where the hell is he?! Shit, shit… he’s not going to show up again. He knows you’ve passed up the shot. Fuck! Fuck!

You need to get his attention. You need to let him know you’ll shoot.

When hasn’t it been crazy?

You stand erect now, balancing on the thin rail with nothing more than your internal sense of balance. This system’s star blazes brightly behind you, casting your shadow over the square. All can see your figure. Using your left arm as a brace, you steady yourself for a shot.

The rifle weighs heavily upon your arms. The winds at this height buffet your body. The adrenaline causes natural muscle spasms. All the conditions are wrong. You will make this shot. You have to.

There’s only one thing left to do.

”Born in the nuclear fire of Fallada!

Forged aboard our glorious fleet at Iglika!

Escaped from the Jaws of Odean!

Us hundred serve the empire, until death releases us!”

With one last shout, you exhort your roots.

Yes, this is a story about touhous.

No, the other parts aren't written yet.

Yes, we will be in gensokyo shortly.

No, I don't have an update schedule. They happen when they happen.


Man if you know what "Futures Trading" is, it's been bugging me...

Not making any *conscious* references, anywho.
Anonymous  2011/09/12 (Mon) 01:49 No. 111
>>110
It's basically speculating on the prices of certain commodities, such as Oil and trading in hopes of capitalizing off of future gains. Not sure, you should check wikipedia.
Anonymous  2011/09/12 (Mon) 10:12 No. 112
>>110
>>111
Specifically, it's the trading of forward contracts - set amounts of goods promised to be exchanged for standardized cash sums (usually going for half a million dollars US each). The initial concept of future contracts is to hedge your bets - if you think the price of, say, corn, is going to go down, you make a contract now to sell the corn you WILL get in 3 months time at the current price and so don't lose out on the amount the price goes down by. (It doesn't have to be a commodity; it might just as well be chinese RMB or UK pounds being sold as foreign exchange)

However, these contracts themselves can be sold on to third parties, as long as they can uphold their end of it. Thus, the future contracts can be traded; ergo futures trading.

Big money can be made that way especially if the market fluctuates.

Such a concept is tricky, to say the least.

The other 3/4 is having the funds to buy into it.

At the end of the day, some lose out, some make money. It's all just about judging probabilities.

>Majority of replies pertain to discussion of business practices.


Oh you. Long story short I wanted to do too much with too little, riding a wave of unsustainable fascination with a concept that I cannot stretch very far in this situation. Here, have what I wrote for the second update. I will be deleting this thread in a few days, consider it a scrap.


With it flies the fate of the Empire. One hundred billion souls, one hundred million starving families. One hit, one slash, one single blow. A dozen scream as the red mist explodes, the man knocked off his feet. Horror arises in the group as they crowd around the man smiling faintly in a pool of red liquid.

Everyone in the area turned to look at the woman, the only sound in the deafening silence. She put her hand, covered in the liquid, up to her nose and sniffed again.

Note to self: Get remedial abseiling lessons!

You grasp the rope with all your might, trying to slow your descent. Your arms tremble as you grapple with the rope, hugging it with all your strength as it feeds and feeds, your distance to the ground shortening.

You take a quick glance over your shoulder, and damn the ground is close! You can’t wait to slow your descent. Fuck it!

You throw the lock into position. There’s a horrible screeching noise as the lock engages, grinding against the rope feed. Come on, come on, come on… Another quick glance over your shoulder tells you that you can’t exactly wait for a slow descent. Well, here goes nothing!

You bash the clamp with all your might, aware of the imminently approaching death known colloquially as “the ground”. You raise your fist with all your might and bring it down on the lock, resulting in a clang and a jammed feed. The rope instantly stops feeding and becomes taut.

You scream. The rope digs into your body through the suit, the force of a near-instant stop paralyzing your thoughts.

Allow me to briefly (lol) summarize the rest of the story: Units move in to apprehend suspect, crowd is too strong, at the apex of the struggle to subdue and disperse the crowd while still capturing the subject, food relief crates would be airdropped out of nowhere. Our MC, Sten, would look skyward wondering what the hell was going on, only for yukari to stare back at him from the void. Crowd breaks up (holy shit FOOD guys EVERYBODY FOOD OMG), suspect is apprehended, much rejoicing was had. Yukari pops in with the emperor past numerous guards, security systems, and basically everything intended to stop just that. She offhandedly mentions she may or may not have had a hand in that, he basically offers her the equivalent of all the people she saved, she just wants one. You. So you get suited up with all the best stuff the empire has to offer, sent on your merry way to god knows where, and are basically at Yukari's beck and call for the duration of your service with her(1 year). You beat up some celestials, some vampires, even a makai demon or two. Ran and you struggle together and grow close while Yukari just kind of lords over you in her greater-than-thou attitude, leaving just you and Ran to actually deal with shit. All that combines into, basically, love. You fuck Ran, maybe some fox babies, who knows, your terms come up, and you defect. Defect in the broadest sense of the term, mind you. The emperor's quite the family man. You might've even gotten a thumbs up as they closed the portal between the two universes. Cue happy ending.

It is. The story was to mainly focus on Ran & You. I didn't put much thought into this Yukari, I was unashamedly using her as a plot device.
SettingsAppearance [X]