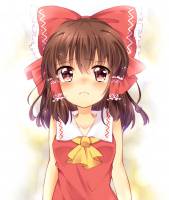 A thought crosses my mind.

Apparently this city is connected to some bizarre dreamworld through my boss's dreams.

The more I think about it...

Flandre, with her bizarre strength and resilience. Remilia, with her ridiculous amount of speed. Kaguya blowing me around with a magical fan, Mokou managing to make a full recovery from a bullet wound to the head

this is all insane.

I do a quick check of my conscious functions

They're also telling me that this is fucking terrifying.

So why hasn't this thought crossed my mind outside of this half-asleep state? Surely I'd have had quite a few more reservations about everything...

I think back to all the locks and security I've installed in this apartment.

I did realize how terrifying all of this was, at first at least. Subconsciously.

More than just the people, something deep inside told me that this place is dangerous.

But it was overwritten, overridden by

By what? Familiarity? Friendliness? How could I even let that happen?

Especially after everything that happened? I've almost died...how many times now?

No, I can't allow this to continue.

Whipping my eyes open, I silently but diligently grab the things I'll need to take with me. This isn't actually that many; I can't trust the phone, or the marble. Not going to need my keys either. In the end, all I end up grabbing is my wallet, my jacket, and the knuckles that Reimu bought me.

...Yeah, there's only one person I can actually trust here. Reimu. Though, it seems that she's suffering from the same problem that I was.

When I think about it...

Picking my phone up one last time, I type a couple messages.

To Yukari, it simply states "I quit." My message to Reimu is a bit more verbose, explaining what I'm about to do and why I feel that she should do the same.

After sending those two messages, I place the phone back down on the table and slowly make my way towards the door, careful not to wake anyone else.

The cold winter air makes me shivver as I step outside. I grit my teeth and bare with it. I don't trust any of the public transportation in this city, so I'll have to make my entire way there on foot.

After a significant amount of walking, I find myself in front of the rail station.

This is probably the only place I can feel safe in this city. Unlike the rest of the city, this place generally has a decent number of people who aren't corrupted. Thank god.

Standing in line for a ticket is nerve wracking, though. No one buying tickets is from outside of the city. Everyone is corrupted. Once again, I grit my teeth and bare with it; I'm still safe, even with these people here.

After I've purchased my ticket, I go to wait for the train.

Eventually it appears, bringing me hope in an otherwise gray and dreadful world.

The doors open, and I slowly step my way into safety. To victory.

Then I hear Reimu's voice.

"John, what are you doing?!" She shouts.

"Reimu, I know it's hard to understand, but you need to realize that this is for the best. It would be best for you to come with me."

"But I can't- John, this is crazy! I know the people in this city are weird, but it's nothing-"

"Reimu, I've seen things I thought were impossible, met people who have died, lived through incidents that would have killed me. Doesn't that seem odd to you? And yet you and I both just live through it, like it's the most natural thing ever. Don't you think that's strange?"

"Of course it's strange, but what can we do about it? It isn't our fault that we're stuck in this city!"

"You're wrong, Reimu. We are the ones holding ourselves here. It's just us. There's nothing else preventing us from leaving other than ourselves. I'm not sure how they've managed to convince us otherwise, but it doesn't matter. If you choose to come with me, we will both be free. I'm sure that you'll realize sooner rather than later that I'm right if you do."

"John, I can't just do that. Look, I know everything's weird, and I know you've been through a lot of stress lately. But we can work that all out! I'm sure that we can get you some sort of vacation time from work!"

The bells warning that the train will leave soon start blaring, cutting her off.

"I'm sorry, Reimu. It looks like there's no more time. If you won't come with me now, that's fine. Just remember today."

Reimu clenches her fist and grits her teeth.

So we're not ready just yet to find the truth? Interesting.

Did I just fall back asleep? Was all of that just a dream?

Damn. That felt more real than my real life for the past few weeks.

But if I don't actually force myself up out of bed, it's just going to keep happening. But it feels like if I sleep in any longer, it'll actually just make me more tired.

Mustering the remainder of my willpower, I somehow manage to pull myself into a sitting position and stay there, despite gravity insisting that I return my head to my pillow.

It takes a moment of staring blearily at the wall before my brain manages to kick in again.

One last remaining fragment of my dream sticks to me.

There's a connection between this city and some sort of magical world. What can I make of this?

Nothing. Try as hard as I can, my brain refuses to cooperate. I can recognize that it's probably going to be important, but that's it. Come to think of it, barely know anything about it, just a few bits and pieces I've picked up from a few places. Enough to recognize its significance, but not nearly enough to start putting anything together.

Do I even want to put it all together?

I catch myself before starting to just zone out staring at the wall again.

I really need to wake up somehow.

-The fan. Would it respond to anyone other than its master?

-Yukari's attempt to push together Youmu and us.

-The fact that we were partners with Youmu in the IN equivalent.

-This last bit is very subtle, but it's in the update just before the latest Dream scene: It mentions how we inhale the food like a vacuum.
SettingsAppearance [X]