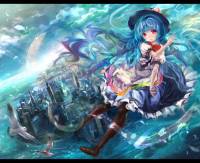 This is my first CYOA story as a full disclaimer and there are still some parts of touhou canon I am not aware of. Feel free to point out bits I've missed as well as gotten wrong. Just a warning I won't be able to stick 100% to the canon - probably going to dick around with it a bit as well. Characters will keep all traits displayed in games though, that's one thing I won't budge on.

Anyways I won't spend a whole load of time telling you everything I plan to go into but I'll get it right out of the gate that I plane to write with no rating, so expect 18+ shit. If there's ever any sex for whatever reason, I'll kind of (tastefully? Subjective term but it's the best I got) gloss over it, I know for a fact I am trash at writing cheesecake. Apologies on that. In addition, I have some themes that may be offensive to some - you have been dully warned.

Updates will be twice a week at the least, with more as I can get them in. I will always allow at least 12 hours for voting though. More realistically like 24 hours per update at the very least.

So, basically the premise is humans have finally broken into Genesysoko. After a bit of initial fuss, it was decided on by the UN that the citizens would be adjusted throughout the United States, in a bid to improve its relations with Japan. Most of them wound up being sent to New York, although a few were sent to California.

Our protagonist is a guy who only has knowledge over this browsing the internet while eating a bowl of captain crunch and browsing an article idly about the war with the moon. Seems that the moon has started to go on the defensive with the new technology gained all those months ago. Oh, and some of them are attending New Leaf State, the college he's heading to. That's neat.

Well enough faffing about, let's introduce you, shall we?

Your name is Alexander Nazareth. Nickname ?Alex," screen handle ?DarkMessiah01.? A nice ironic homage to your rather pretentious last name.

You live alone, lacking any real family. Your parents are drunkards, and you lack any siblings. Ah well, who needs em? You got the internet! You're currently twenty years of age, with your twenty first birthday not for another few months. Not like anyone will get you anything, all your pals are digital. Well, one of them will buy you a game, probably.

Regardless! it's time to get ready for the first day of college. Sure, you dilly dallied around for a year with a dead end job after your parents kicked you out, but it's time to get serious! Go for broke with college! You can do this, right? You gave yourself a prep talk and everything. This is all you.

it's not like your apartment is a dump. You managed to luck out, your parents at least threw some cash your way, so you've got a pretty decent setup, especially given that this is New York and rent is way too damn high. Got your computer, your game systems, your TV, what more do you need?

Well, you're about to give up the whole ?cozy apartment? feel since you're going to move to a campus dorm while you're in school, but hey! Your bro of a landlord said he has no qualms looking after your tv and couch and shit, you just owe him a few solids
Anyways, time to get to school. it's the first day, after-all!

The car ride over's fairly uneventful, in fact you're here beyond early. Guess it was a mistake to be enthusiastic. You thought the radio might pump you up, but Foo Fighters just isn't doing it today.

The school itself is pretty?imposing, really. You pass through a series of talisman-encrusted gates as you walk in, feeling your body tingle. A plaque proudly leads ?New Leaf State!" Yeah, certainly clever. If it wasn't for how cheap it was, you never would've gone here, honestly. But alas, funds trump obnoxious names, and so New Leaf it is.

The school halls are pretty empty, all in all. Nobody's really here yet aside from the office staff, who give you your papers and send you on your way. Adorning the halls are various American cultural symbols, as well as ones you presume to be from Genesyoko. Ravens and Eagles, shaking hands, is an image that particularly stands out in your mind - seems they're really trying to drive home the whole ?acceptance? thing.

As you walk to the dorms to drop off your things, you notice it's empty as well. Drat. Seems your room-mate hasn't shown up yet. Or mates? Who knows, it might be more than one. You'd check, but that can wait until you unpack later and meet them in person. For now it's time to head to class!

Which is also dead empy, four rows of desks and chairs seated in front of a display board, which is currently empty, the projector in front of it turned off. Yeah, nobody's here yet, you're early by an entire hour. You double-check your schedule, to make sure all is right, -yeah, you're at 102 English - and lie down your head for a little nap after you set your things down.

A voice finally says, shattering the comforting darkness of sleep, nudging you with a gentle hand.

The voice was?
[]A tired, yawning voice

Right, so let's straight into this.

This is promising, hopefully it won't disappoint.