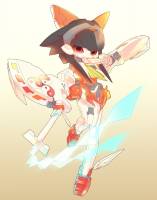 Who am I? Just a bored lurker anon looking to relieve boredom, and hopefully provide some entertainment in the

It had been exactly 3 minutes, 24 seconds and 32 milliseconds (her flawless biological clock kept count perfectly)

Royal Highness and Crown Princess of the Holy and Noble Country of Sueland, also known and worshipped throughout

the Universe as The Goddess of Everything, or in some places The Perfect One, had entered Gensokyo.

She was stunningly beautiful, with raven black hair and strikingly full red lips that contrasted starkly against

pale, smooth skin. Her eyes were a deep purple, innocence dancing within them and enchanting anyone who so much as

glanced at her. Her hair was long and a striking shade of pink, edged with gold and striped with the occasional

tinge of blue. Pure white wings extended from her shoulders, the tips of the feathers just brushing the ground ever

so slightly. In the morning sun, they almost seemed to glow.

Highness and Crown Princess of the Holy and Noble Country of Sueland, also known and worshipped throughout the

Universe as The Goddess of Everything, or in some places The Perfect One - who preferred to be called by her much

shorter nickname, - glanced around and let a soft sigh fall from her perfect lips.

"This cannot be. How can this fair land not yet have succumbed to my charms? It is unthinkable that such a lovely

place could exist and yet be so backwards." Sue paused to think for a moment, then the corners of her lips curled

Reimu was, as usual, sweeping the shrine. The broom in her hands moved almost absentmindedly, as she walked slowly towards the other end of the shrine, resisting the urge to check the donation box - there wouldn't be anything there, she already knew.

Placing the broom down to lean against a convenient wall, she returned to the shrine steps, where she slowly sat down and picked up her cup of tea from where she had left it. "It's been really quiet lately... no major incidents... or even minor ones."

She sipped her tea, wondering idly if something had gone wrong with Gensokyo. It was rarely, if ever, this peaceful. "Even Marisa hasn't visited for a long time... hey, what's that?"

Sue landed a short distance away from the shrine, her sharp eyes already noticing the approaching shrine maiden. Her eyes began to glow, and in a short time had turned a dark red. "Prepare yourself, foul oppressor!"

And with that battle cry, she prepared to attack.

>You control anything and everything that isn't the Mary-Sue.

Sure we do.
SettingsAppearance [X]