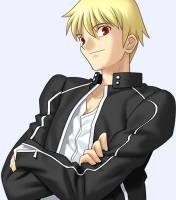 Your name is Masami Darkness Fairy Princess Blargh Chocolate Dagger Rapémachine the Sixth. Or just Rapemachine. Also you are not Gilgamesh. Just his daughter. Because he can totally have daughters in this current day and age.

Using your super special Fairy Princess Clash powers, you appear in Gensokyo. Just because you played the games and beat it really really easily and it made people like you too much. Such is the curse of being perfect.

There's a very annoyed girl, predominantly clothed in sanguine and alabaster. Her ochre orbs convey annoyance. You seem to have destroyed her religious domicile.

The girl (you wanted to call her a maiden, but she was so indecent with her exposed armpits and sideboob) blinks at you oddly.

"I don't even know your name and I don't ca--" She attempts to speak, but you cut her off.

"Well? Give me a better name."

"How about I call you 'Fix my goddamn shrine or I'll cram your name up your ass.'"

Oh no, the foul wench is being belligerent! Whatever will you do now, Fix my goddamn shrine or I'll cram your name up your ass?

"You dare insult me? I, Rapemachine, will rape the shit out of you! Here, have some Gate of Babylon!"

Countless ripples in space appear behind you, and the background of the scene changes as swords pull themselves out of the distortion in space. Also spears. With a haughty gesture, you direct your bladed wrath towards that rude ebony-haired teenager. Countless swords and far less spears fire themselves at her, and then loop around to try it again.

The impudent girl just dodges them over and over, instead of losing with dignity and submitting to your will. It looks like she's not even trying hard. How rude! Back where you came from, you were the metaphorical shit, the bee's knees, the head honcho, the grand poobah, the big cheese. You were also great at martial arts (as to be expected), so in frustration you call off your attack and charge at her, flying through the air on your fairy princess wings.

Your swift (and impossible!) defeat is swift, and embarrassing. You had no idea she was that good at fistfights. Did it even count as a fistfight when you disappear and do a teleporting drop kick?

She sits on you, and moving your arms is difficult. You can't possibly lose!

You have no idea how far both of you are up in the air, but you can see a bunch of houses looking all tiny-like, and it doesn't appear either you or the heathen are giving up your teleporting wankfest.
Anonymous  2010/02/13 (Sat) 17:56 No. 25060
[x] Grab her by the foot as she tries to drop on you and execute a spinning piledriver.
MSiG Writefag !ayMLpr/KpQ 2010/02/13 (Sat) 18:04 No. 25061
>>25060
You teleport, and wait. How very PREDICTABO, she's about to kick you in the head. You grab her leg, and then shift your grip slightly. As you drop, you use your powers to spin, and spin fast. Like a missile, you impact the stone ground of the heathen's shrine and create a massive crater from your implausibly high spinning piledriver.

You leap off her body and strike a pose! You are... victorious!

You cop a victory feel.

Nobody seems to take you seriously, even considering your elegant charm, graceful personality, and overwhelming power.

What do you do, Masami Darkness Fairy Princess Blargh Chocolate Dagger Rapémachine the Sixth?
Anonymous  2010/02/13 (Sat) 18:26 No. 25065
[x] Head back to the shrine, find some rope to bind her and ride her to the village to show your glorious triumph that shall make those peasants bown down before you.
MSiG Writefag !ayMLpr/KpQ 2010/02/13 (Sat) 18:28 No. 25066
Bunch of backwater bastards. Nobody here can see talent even if it walked into town and told them talent just piledrivered someone from a mile up.

Using your other charms, you ask who the leader of this craphole is. They seem to point you to a woman with long hair and an extremely funny hat. Her name seems to be Keine.

Now what? Your "must cop a feel" meter is going haywire.
Anonymous  2010/02/13 (Sat) 18:32 No. 25067
[x] Demand that she hand over the leadership of the village to you, because you're far more capable than she is. You'll allow her the grace of being your personal assistant, thought.
MSiG Writefag !ayMLpr/KpQ 2010/02/13 (Sat) 18:36 No. 25068
You make it very clear that you demand ownership of this... charming village. Because you're far more beautiful and smart than she is and will ever be. Although, she seems reasonably intelligent, especially if she acquiesces to your query.

She refuses. Is this any way to treat someone such as you?!

She headbutts you back.

Both of you headbutt each other, and then back off.

All-powerful as you may be... this woman, no, Keine. She had a headbutt to rival the gods themselves! Well, god. You don't have any serious mental problems.

The air behind you shimmers and ripples, blades coming out point first. You really won't lose this time!

"Ahahahahaha, once you lose, Keine, I'll make you my servant! And then we'll see who's better at headbutting!" You take a few seconds to laugh maniacally while the law of villain speeches covers you.

You raise your hand and are about to drop it to signal fire, but that girl from before (now you know her name as Reimu) teleports out of nowhere and kicks you in the face.

Which should be impossible.

YOU CAN'T BE DEFEATED

Awful lot of thought for a teenager that got shitfucked.

That heathen girl's neck at an odd angle. Keine's head burst open like a melon. So many people cut in half. A sterotypical witch, headless. A mansion. A gate guard torn in two, a mashed up maid. Lungs torn out of a magician, two vampires staked together. A girl with dolls, you strangled her. So many rabbits, you collected their ears. One fiery girl who wouldn't die, you buried her far underground. To a house in the middle of a forest, only more immortals, now perfectly encased in steel.

A woman with butterflies, how beautiful... ghostly essence fades away nice, along with her sword servant. A girl with two tails, a woman with nine. It doesn't matter, more for your collection.

A woman you cannot describe...

Nope. It's Shino/Ponjiyuusu, the artist of the image. She started illustrating a comic all about her experiences playing the Touhou games a while back, and that evolved into a series of comics in which she takes the place of the player characters, and faces off against each of the bosses. Despite being a self-insert series the comics are pretty good, mostly because everything in them is played for comedy. Shino isn't the best player in the world, which translates into her getting her ass beat all over the place; she's also an enormous pervert, and spends most of the confrontations trying to cop feels, flirt, or molest every girl she encounters.
Anonymous  2010/02/15 (Mon) 07:59 No. 25113
>>25112

To be honest, YAF's Gilgamesh stand-in was doing pretty well, until he decided against the vote to rip out Satori's (second) heart.

Someday I will have my Gilko in Gensokyo.
SettingsAppearance [X]