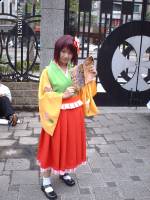 Haven – is a place with no alarm clocks, bosses or Mondays. Oh, and mikos either.

Such a thought afflicted me the day after I found out Rinnosuke's wife cheated on me with some random bitch from the Forest. I tried to forget, but the only thing you can apparently forget is sclerosis, so I decided to go and drown my sorrows in a pint of gin, for a better measure. There was a newly opened restaurant in the village called “Deja Vu”, so I went there and ordered the usual thing.
The bartender―a young-looking girl―greeted me the traditional, Gensokyan way. She shot three bullets in the air and missed. There are many mysterious things in the world, and the longer I studied local customs, the more secrets I found. Before she handed me the bottle, she asked if her bag suited her shoes. Her skirt was short enough to answer positively. I had to say she was still a bit unstrung – the previous week, Mokou had dropped smoking. Half the village burned down.
Nevertheless, given that there wasn't many people around, she quickly started off a conversation to pass the idle time.
What's the matter, you look down, ―she asked.
Nothing, ―I quickly replied― I'm just starting to think that women treat men like alarm clocks. First they turn them on, and then don't let them finish.
The girl nodded understandingly. Indeed, the betrothal period is essentially a process of a man falling deeper into a woman's hands as the time passes. It's like a jungle―if you want to know which fruits are edible and which are not, you've got to go there in company of another person―and what awaits you after that resembles a poop sandwich. During worse days, there's not even any bread to speak of.
I sighed and looked at the girl. She was definitely the type you'd easier undress against her will than dress according to her wishes. Why not, ―I thought― Freud tried everything in his life and called 'perversion' everything he didn't like. After all, I would still be in a better situation than a bird that's afraid of heights or a fish that's afraid of water. That evening Rinnosuke would return home and not find a buddy to drink with in his cupboard.
But as I was about to suggest a vis-à-vis meeting to the girl's best part, a pair of guys dressed in uniforms barged into the room and went straight for my back.
There's been a theft, ―they said― And the culprit was reported to look like you. Do you have an alibi?
Yes, ―I told them and asked if they accepted checks.
They did.


But that's exactly why a few hours later, when it was the time to pay, I ran into some more trouble.
The bartender―now a hazy stain of pasta on the carpet of shelves behind her―asked me to pay and leave, as the time of closing drew sooner. Unfortunately, the sum she said made no sense whatsoever.
Don't you have any money on you, ―she asked― Do you even have a job?
Yes, ―I said and scratched my left head, which felt a little larger than the other one― My job is actually really responsible. I, on the other hand, not so much. How much was it again?
She repeated the sum, but I still couldn't hear.
Look, ―she leaned forward and grunted― I'll show you on my fingers. Do you see the middle one?

And so I learned even a pigeon of peace can shit on your hat. All that remained was get home and figure out the difference between conscience and a bladder.

See, this is why you shouldn't admit who you are.

That aside, this is alright but something about it lacks impact. I'll admit that this line:

>Such a thought afflicted me the day after I found out Rinnosuke's wife cheated on me with some random bitch from the Forest.