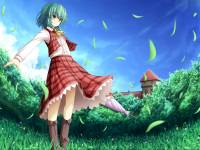 Sorry to bother you guys with personal request stuff. I don't even know if this is the right place for this, but I'm at my wit's end. I'm looking for an arrangement of Yuuka's theme from PoFV that I used to listen to years ago. The channel it was on seems to have been taken down and I can't remember the artist. I've looked through millions of arranges on youtube and it doesn't seem to be on there at all anymore, so I'm hoping that someone on here might remember it.
The channel it was on was called SakuyaSaigyouji. The attached image is the one it had as a background.It sounded like normal pop music with a an acoustic vibe to it, a bit anime opening-ish. It started with very little instruments and female vocals humming her theme and then another female voice kicking in that sang on top of them for a short while, and then the instruments started.
Since this was quite some time ago, I'd say the song was at least from before 2010, and probably from before 2007 (if not even earlier).
I know this is very little to go by but since this image board seems to be relatively alive compared to some of the other ones I really hope that someone here might remember what I'm talking about or can at least direct me to a place more likely to know. Thank you in advance!

Anonymous 2016/05/16 (Mon) 23:30 No. 14216 ▼
Delete Post
Report Post
>>14215
My first thought for this was to put the channel url into the Wayback Machine, but sadly either the url isn't https://www.youtube.com/user/SakuyaSaigyouji/videos, or the Wayback Machine has finally failed me.