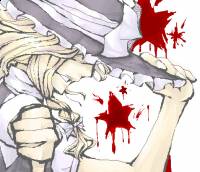 "Nn?"
Sensing movement above, in the treetops, you stop in your tracks and search for it's source. Damn, if it's another one of them fairies, this is really monotonous. Wish a bigger fish'd come out, this is getting boring.
Again, the same noise. What the hell? Are those birds or is some psycho flying through all that thicket above? No, for sure, there is something there, as there are also leaves falling down...
And suddenly, it lands. A girl dressed in black, with a ridiculously large hat on her head. And a broom in her hand.
"What the hell is that!" you can't hold back the confusion set by her outfit "What manner of insanity is this!"
"I am Marisa!" she waves around her oversized hat cheerfully in some sort of a pseudo-theatrical gesture "And I am not 'that'! I am the greatest human witch in this world!"
Oh. A witch, eh? And the greatest one at that? Okay, this could be fun. Finally something entertaining.
With a slight smirk, you raise your hand and close one eye. Then, place your thumb where you see her legs, and one finger at her head level, making an aproximately 6cm gap between those two.
"Doesn't seem so great from where I'm standing."
"Tough guy, huh?" she returns your shark-toothed smile with equal fervor "Well that's annoying. Now, I'm going to ask you one thing, and you're going to answer me, mm-kay?"
You shrug.
"Whatever you say."
"Please die!"
As if in answer to her ridiculous plead, out of thin air, a barrage of colourful objects comes flying everywhere around. You merely sidestep a bit, dodging a whole salve of purple stars that was about to hit your handsome face.
"Hmph! Way too slow!"
With a slight movement of your thumb, you spin the cyllinder of your revolver. Unnecessary, but it's always good to know that it won't jam when the situation gets too hot. Another wave of glowing projectiles misses your body, thanks to the everpresent, light evasive manouvers you pull off, purely out of instinct.
"Come on! I love this!" more and more bullets appear, but none of them hit their target "That's what I'm talking about!"
Hell, it probably wouldn't hurt you much if some of them actually reached their destination, but that'd be simply disgraceful.
"What's wrong?" you send her a mocking glance while still sidesteppin and leaning to the sides, not letting yourself be hit just yet "Why not shoot? Did your broom jam or something? Oh, but you are already shooting. My bad, didn't notice."
You can't even be bothered to look at her face, undoubtedly stretched in an angered expression. Still effortlessly dodging her stars, you quickly raise your hand. The one bearing your treasured silver S&W500.
"Hey, hey, hey! Come on, girl! You can do better than that!"
"Why you! Take this!"
She pulls out a small object from under the frills of her skirt. What is it? Another one of those magical tricks? Or she she trying to make a feint? No matter.
"Love Sign! Master Spa--!"
In no time at all, not even a second, you close the distance between you with an enormous leap. None of the stray bullets even graze your clothes as you do so, and neither she is able to to finish her cry before you put the revolver's barrell on her forehead.
"Best of luck on the other side. If you ever come by someone named 'Thomas Gaatz', give him my regards."
She's so scared she can't even scream like she should in a situation like this.
"Bang."

>I LIVE IN POLAND

Can't argue with that.

I respond to trolls for the sheer enetertainment of it.
SettingsAppearance [X]