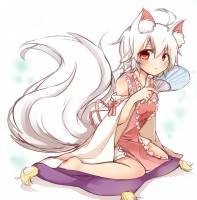 >>37483
The title says to write a lewd piece in 24 hours. It says nothing about it being complete.

That said, if this was supposed to be a satire about how dead THP is, OP should stop beating the dead horse and actually write a real story himself. Either way, this is not funny.
Anonymous  2015/10/19 (Mon) 18:00 No. 37485
One fine Spring morning, Tewi found herself in heat.

"Alright fine, lets do it" Reisen replied, "But only because I'm in heat too. D-don't get the wrong idea, its not like I'm having sex with you because I l-like you or anything, d-dummy."

Soon, the sounds of the two rabbits moaning, grinding, and sexsploding attracted the attention of the other residents of Eintei, who barged into the room to investigate.

"Reisen!" Eirin exclaimed. "For shame! You can't just go around fucking people like this."

"Sorry master," replied Reisen as her vaginal fluids soaked Tewi and the wall behind her with all the force of a sexually frustrated bazooka.

"You're a medical professional for Gods sake," Eirin continued. "How many times do I have to tell you, if your going to have sex, always use a condom. Just because neither of you has a penis, its no excuse not to practice safe sex."

"Why Princess, I thought this day would never come," replied Eirin as she ripped her and Kaguya's clothes off in one swift motion. "I would be honored to take your virginity," Eirin continued as she tackled Kaguya to the floor and proceeded to fuck her like a rabbit, despite neither one of them being a rabbit themselves.

"Ohh Gods!" Kaguya screamed as three vaginas cummed against her own. "Sex is every bit as wonderful as I thought it would be! I wish this moment could last forever!"

And they all fucked happily ever after.

Screw 24 hours, I wrote this in like 30 minutes.
An excuse for Moral not delivering Not Teru !Wo5j3FYZRg 2015/10/19 (Mon) 18:14 No. 37486
As she undid the top button of her blouse, Momizi couldn't help but feel self-conscious about the pair of eyes trained on her. The light reflected off of them like a pair of small saucers filled with soy sauce, a shimmering black which clearly showed interest in her increasingly exposed flesh. It took all her remaining concentration to keep from turning as red as a cayenne while she slowly worked on the rest of the buttons. She'd have to catch up quickly, she thought, her partner was already about as naked as one could possibly be.

"What are you thinking about?" Momizi dared to ask, stalling for time to collect her thoughts. That said, a part of her relished being the center of attention, it was a strong and sweet sensation that she wasn't quite used to yet.

"I'm thinking about just how savory you look," her partner replied with a smile. "Also if I'm honest I'm trying to figure out if I've lost my stake in our betting pool."

Momizi paused her work, her mood quickly turning to vinegar. What a pickle. She had been looking forward to this moment but at the same time she didn't like being the subject of gossip. Her fist balled up as she instinctively felt like creaming the idiot with a well-placed punch.

"Relax," a few apologetic words followed, "don't shoot me that heated glare... I won't tell another soul. I'm not ready to be turned into sauce just yet. It'll be our secret." With a playful wink, her partner added, "I wouldn't want to let this opportunity go to waste. They thought that you were an 'A', one size too small by the looks of it at least."

"I guess I enjoy your spicy side," Momizi laughed the situation off, suddenly feeling liberated. She was still sweet on this exchange and her sour mood quickly dissipated. Maybe it was the stupid compliment garnished upon her. With a final tug, she cleared the last button and her blouse slip from her shoulders.

Her partner couldn't hold back anymore. In a flash, the gap between them was closed as they kissed. It was a forcible and sudden event that was as hot on contact like a helping of wasabi. Still, almost paradoxically so, the actual movement of their tongues was slow as molasses. And tasted about as sweet.

Momizi felt a hand press up against a breast, seasoning her skin with little electrifying pricks as she was gingerly pinched and teased as they kissed. It certainly peppered in some excitement into the exchange and far from feeling salty about the bold move, she found herself wishing for even rougher treatment. At the same time, slyly, as her defenses were shredded, the other errant hand moved to a sweeter spot below. It rubbed carefully over her clothes, fingers occasionally dipping into the crevice, like a smooth pestle playing around at the edges of its matching mortar. The motion seemed to tease things to come - that'd they'd soon be making aioli together.

Dear reader, can you believe that the creator of this thread talked about writing lewds and involving condiments in his writing but then failed to follow through after a single sentence? As a passionate and dedicated soul, I chose to continue the dream and hopefully shame the writer into actually fulfilling his promises. As the above is several weeks old, dear reader, I most certainly failed.