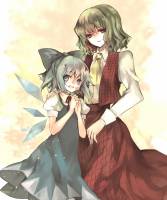 Once upon a time, there was a woman.

Once upon a time, there was a monster. A monster that looked like a woman.

A monster, indeed, a monster. Did she have horns, or did she have fangs? Did she have a sharpened tongue, for people to call her a monster that steal bad children from their beds at night?

So why did people call her a monster? Did she have a clawed hands or magic eyes that turn you into stone?

Or maybe she just had monstrously smelly feet?

But alas, the size of the lake could no longer impress the people around, because for most of them, it was the only lake that they will and ever see, in that secluded land of fantasy.

But for a certain Ice Fairy, the lake was her entire world.

As the monster walked down the road to the lake in a particularly hot day, carrying an umbrella made of a giant sunflower she grown herself at her garden of the sun, no man, woman, boys nor girls, would walk the same path as her. They'd see the birds and feel the wind running away from her, scared, and then they'd become scared too, and then they'd run away, too.

As she arrived at the edge of the lake, she would take off the shoes she had knitted for herself from the stalks of an Elderberry, as no one would make shoes for her. Not even if she offered to pay with the most delicious cookies she baked herself!

Sometimes, though, she would meet people that were not like the other people, people that are unique, kind of like her. Sometimes, when the monster sat at the edge of the lake, these special people would greet her, and then they would leave. These people are special persons with special jobs, they cannot be bothered with her for too long. The monster understands this, and she did not mind. She's fine with being alone.

One day, when the monster was cooling her feet, she was approached by an ice fairy. Not just an ice fairy, but The Ice Fairy, the strongest and the prettiest of all the fairies, with clear crystalline wings that was the envy of all other ice fairies. The ice fairy was curious. She had seen the monster a couple times before, and she's wondering why the monster was always alone.

Fairies were not too bright, and the strongest and the prettiest of them was not an exception. She cannot remember the monster's name, or that she's a monster at all. For her, the monster was merely a kind young lady that likes flower. The ice fairy loved flower, especially the Winter Bloom.

The ice fairy asked what the flower lady was doing. The lady answered that she was cooling her legs.

The flower lady was not particularly fond of fairies. And the strongest of them was not an exception. With her power, the ice fairy was easily destroyed into hundreds of ice cubes, enough to open a hundred shaved ice stands.

The ice fairy was strong. Even as her body was destroyed over and over again, and as her soul broken and rebuilt, she didn't want to give up. She is strong, and she knew it.

And she knew she was strong, no matter the lies of the people calling her stupid or weak, the people that discarded her as a mere obstacle to their destination, a speed bump on the road, a piece to be walked over without a second thought.

The ice fairy was strong, but even the strongest has their limit. At one particular day, among the giant stalks of flowers that symbolize the cheerfulness of bright summer day, an ice fairy was crying.

The flower lady did not know what to do. She did, however, know what she had. She was almost finished baking her lemon cake, and she sure it would be delicious. And it is an established fact of the world that nothing cheers people better than a lemon cake! Except perhaps a warm hug from a person you love the most, but unfortunately, the flower lady was fresh out of that particular ingredient at that moment.

The flower lady pull the cake from the oven, and then she put on the cream, and the fruit, and as the ice fairy put the freshly dressed cake in her mouth, she began to smile. For some reason, the flower lady does not want that smile to go away. She wants to see that smile, every day from now on.

A lot of things happened then, but the ice fairy began to visit the flower lady regularly, every day with new ideas for her chilled frosted cake. And then the flower lady would take out her own cake from the oven, and they would eat together at her porch in the middle of the garden of the sun. And then, most of the time, their little feast would end with the ice fairy declaring her own defeat with a smile. Because, as the flower lady had told her, accepting the occasional loss was part of being strong, and she was the strongest, after all!

Day by day passed, and without any of the two realized, they had become friends.

And later, without any of the two realized, they would become closer. Much, much closer than friends.

[ ] Battle of dominance between two equals.

She used to have a mansion, but after a certain incident, having it rebuilt just seemed to be too much of a hassle.

Inside said cottage, Kazami Yuuka had, until a year ago, everything she needed to live a content life by herself. A bedroom with a small and comfortable bed, a few sets of eating and cooking utensils, a set of clothes for a week, a simple kitchen with oven and fridge, a veranda with a single chair and a small table where she would eat her meal, a bathroom with internal heating (courtesy of the Kappa), a living room with a single armchair and a medium sized bookcase, and all other things needed to accommodate for one person to live a comfortable life in a place that otherwise could be called the middle of nowhere.

But, exactly a year ago, in the middle of summer, something had changed. A little variable had unexpectedly came barging rear-first to the life of Kazami Yuuka, crashing into the living room without even realizing that there was a door to knock, a variable as subtle as a dancing elephant in a pink tutu in the middle of a tiger den.

Along the year, Kazami Yuuka witnessed her small and simple cottage transformed as she added bits and pieces to accommodate the said variable. Her living room, used to only contain the barest necessity to be called a living room, now contains a few beanbag chairs in addition to her comfortable armchair, piled together on top of each other in one corner of the room, ready to be used at a moment notice, either to be sat on, or to start a grand scale impromptu pillow fight. The bookcase that used to be reserved for the works of the brightest of minds, said works now have to be content sharing space with several picture books that she had bought from the village's second hand shop, reserved for minds that had barely crawled out of their mother's womb. Her bathroom now has an integrated cooler working tandem with the heater, just in case a certain someone would suddenly want to deliberately take a cold bath. A whole new room has been added recently. Where she used to eat alone at her veranda, she now has a fully furnished dining room, though curiously, there are only two chairs. In addition to the new dining room, she also traded a few rare flower seeds with the people of Scarlet Devil in exchange for some high quality, western made tableware.

Basically, the only place in her cottage that hasn't changed along the year is her bedroom. Beside the fact that her wardrobe now contains clothes way too small for her, her bedroom still only contains the most modest of decorations, alongside her single, comfortable bed that only fit for the use of one person. Maybe she should get another bed?

And that day, for a reason she's not sure what, Kazami Yuuka blushed.