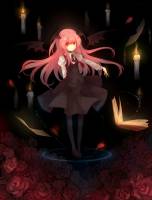 
You want to die.

How easy to lie down and drift away a lone soul, your body and pains and fears and everything left behind, forgotten forever beyond the river Lethe. To drift peacefully through the endless halls of Hakugyokurou, awaiting judgement nor resurrection. Free.

A hero you've been called - and many the hero who's trekked the path perilous. But how many have suffered it twice? To return, retrace ones steps to the upper air where you can breathe- only to be plunged back into the choking Styx? Ask of the great ones anything, anything but this:

Towers of tomes surround you, thirty titles in six languages swimming together as you look at them. Neat lists scroll endlessly down your blotter-pad-turned-notebook, intricate webs of lines linking endless chains of concurrences, contradictions - conclusions?

Chaos. Just chaos. You're floundering. A lifetime of experience avails you nothing in Voile. This sea of literature is alien to you, and the sole guide demands a high cost - no NSA discount on journal access, here. From king Academia, ruler of all he reads, to this: chasing lucky leads in misfiled books you find by chance. All to drag a burden you never asked for and can't seem to budge.

You look sidelong at the hilt of the axe, leaning against the table next to you. With a nudge of your elbow you knock it away listlessly. It falls away, slowing to a pendulous halt inches off the floor, then rising again to clatter against the table-edge. The sturdy tree-felling blade of a woodsman's axe mated with handle enough to handle like a Danish greataxe - and that handles anything hereabouts.

Fucking paperweight. Fucking Paul. Fuck him and the ox he rode in on. One of seven, you once slipped the surly bonds of quantum entanglement to tweak the nose of God, but after everything awesome and awful which followed, it's here, in another sodding library that you finally can't give a damn. You want to dash the books to pieces and crawl under the table and never, ever wake up again.

But people are counting on you.

You slump over the table, face buried in crossed arms. You're running out of time and they're counting on you and everything - nothing is -

You don't know what to do.

oh oh oh wonderful tingle of relief through your hair shivery surcease through your scalp and down the spine please please be everything no muscles no movement no cares just caresses for-ever????~

Wept out where you lay, in your sleep. Longing lingers in your scalp and skin and soul. You wish to linger in limbo; deep enough to dream and awake enough to feel....

The memory shivers down your spine, electric and warm. Like the weeping in limbo, just afore waking ? real. You shift your head against the wet cotton of your sleeves.

A jerk, a start - upright in the library, cold dark library, lamp burnt out. Alone with an empty reality. You wipe your cheeks dry with a sigh.

And sit in the shadows.

You turn over spadefuls of thought but only time answers, the steady tick tick tick of a watch wanting for winding. Emerging only for the entangled.

Ticking on. Best catch up.

You open the lamp and apply your lighter to fresh wick. Your trap of tomes is revealed anew, regular and regmented as brick.

But for this. Thin tome atop the tower of texts. You slip it off and turn it over in the flickering light. Your attempt to track the twining path of your study lies scrawled before you - without this title.

You turn to the first page.

Fourth-fifth-sixth-seventh-eightyith fro and to and slam it closed into the table.

Exactly what you needed.

The tingling touch the tome the sigh- sitting before you in the low luminance. Probability is your profession. Voile's vastness precludes chance and Patchherself. The waveform collapes into a single possibility.

The assiStill talking. The books you need, squirreled away in some dusty shop, smug satisfaction at having the proprietors adorable daughter wrapped around her finger and she'll put in a good word for you if only you do a favor for her and blah blah blah bullshit. My unfocused eyes gaze through her hollow facade as she flaps her gums.

You started the week with one fuck to give - and used it up on Tuesday. You continue staring right through the trite tricky tanuki and she falls into my bottomless eyes.

"Get out," you say. "Before I nail your tail to the ceiling and use your head as a speedbag.."

Her eyes harden as she sets the teacup aside with a measured motion. The tanuki's lived five livetimes to your one-fourth of one - she knows herself and her enemy. Sure victory. She rises, tail swishing gracefully as she ascends on those long, graceful legs -

- and then you're an inch from her face, eye to fathomless eye. She twitches violently and topples into her chair again.

"Think again, tanuki," you whisper as you stare down. She stares up at the scientist, the cold gaze regarding galaxies gigaparsecs distant and subatomic particles a thousand orders of magnitude smaller then observable reality.

You've seen much further then most men.

And now the tanuki sees who she's fucking with.

You stagger a step forward and fall into the vacated chair, snatching the tanuki's tea. Conservation of energy commands consumption.

She saw, all right. The mind, the mathematician, the marvel.

You grip your head in both hands as the headache hits, teacup tinkling in brittle demise somewhere distant. Is that what she sees?

Or does she see the strained stressed strung-out overworked helpless hopeless me?

It is rather morbid! This is not so good!