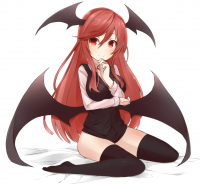 Silently, the cloaked figure lowered himself down from the ceiling by rope. Its length runs out almost ten feet off the ground, and he struggles with it before he detaches, crashing to the ground amidst piles of books.

He cries from the floor before quickly sitting up and quickly glancing around.

He mumbles to himself quickly before bursting out of the books. Scanning the room, he is confused by the large, mazelike bookcases that surround him, but quickly resolves to complete his mission. He goes down one corridor. Then another. A left, a right. 180, and he’s lost his entrance, too.

Confusedly he looks around before being surprised by a female voice.

He yelps, spinning to meet his challenger. Impeccably dressed, red tie perfectly complementing her red hair which contrasts to her black vest and skirt.

The man quickly moves to dig into the pockets of his cloak.

He pulls out a sparkling silver rosary, holding it up.

“I condemn you! F-Foul beast!”

She shakes her head, holding out her hand and taking a step towards him.

“I think you’re confused. Were you looking for a book? I can help.”

He drops the rosary in his fright, reaching back into his cloak and pulling out a handheld crossbow. Both are surprised, the man aiming too high and the woman ducking. It bounces off a bookcase with a ‘ping!’ and the library attendant looks up from flinching to see him holding an empty weapon.

“Well I never! Shooting at the indentured help! I’m going to wipe that- that- face off your face!”

He shrieks and drops the crossbow before reaching into his cloak and pulling out another, closing his eyes and succeeding only in hitting the ground. He opens his eyes only to shriek again, like a little girl, as she advances on him. She smacks the crossbow out of hands and grabs him by the collar, berating him.

“Now what do you think you’re doing? Don’t you know you could seriously hurt someone with that? Coming in here and talking about vampires and things!”

He tries to push away, plumping his hands right into her breasts, flailing them around trying to get away. She gasps and loses her hold, bringing her arms up to cover her breasts. Flailing, the lad turns and tries to flee only to trip over himself but feet away. He rolls over just in time for the lady to pounce on him, sitting on his chest so he can’t escape.

She says teasingly, as if it were a game. She leans back so as to bring her face closer to his, only to run over a slight bump.

She straightens up again, running the inner lining of her thigh’s pantyhose along his small, hard ridge, letting out a small gasp as she does so. She brings her hands up to his collar, again grasping it.

“Just… just what do you think you were doing here?”

She almost struggles at the last bit before giggling, using her grip on his collar to pull herself forward and back.

She pulls in again, running over his bulging erection. Bring her face down to level, she whispers.

“Why don’t you try to push me off again?”

She even helps him, picking up one of his hands and bringing it up to her chest. He faithfully agrees, too dazed to refuse. Her mouth opens in a silent moan as her back arches, enthralled by his caress.

He comes to, shrieking and grabbing for her hip, trying to throw her off. He only succeeds in bouncing her up and down on his crotch, much to her cries of excitement. With a loud groan, his hands fall back as he loses the will to resist. She licks her lips, using one hand to play with her breast as she rubs herself through her skirt, juice starting to soak through.

She descends to quickly peck him on the lips before sliding off, exposing the run of juices down her leg. She quickly positions herself below his lower body, spreading his cloak so it won’t get in the way. With a small flourish she rests her index finger on the tip of his erection, clearly visible through the pants. She twists and twirls, toying with it through the fabric as he groans, fidgeting his hips.

She teases, tracing a line with her finger up to his zipper before quickly pulling it down. It needs no further encouragement, his erection popping up straight through his underpants in clear view. She whisks her hand over it, gently running it along the left of the shaft to his pleasure. His lower body seems to shudder as she takes her hand away, leaning in and gently blowing on it.

She reaches up to stop his hands from interfering.

She laughs, just as excited as he’s becoming. She pushes her hair aside, taking his member into her mouth. He bucks his hips, forcing it in as he lets out a loud, long moan. For her part, she continues to blow him, teasing his penis with her tongue as she bobs up and down, moving lower as his groans of pleasure increase. One hand goes down to fondle his balls, and he cries out right before she pulls off and grabs the base of his member gently. Licking her lips, she chastises him.

He groans, giving a slight nod as he lay in absolute serenity. She gleefully releases his member, standing up and quickly discarding her shoes, followed by her pantyhose, and finally, a pair of black silk panties.

She positions herself over his erection as it stands straight up. Lowering herself onto it, they both gasp as it grazes off, grinding against her clit. She pumps, continuing to grind against it. She only stops when the two of them are panting; small sweat beads starting to form on both as their groins are an intermingled pool of precum and pussy juice.

She bends down to embrace him in a kiss, their tongues exploring each other as her hand creeps toward his lower body. At the height of their passion, she pulls away onto his member. She lets out a loud cry as she takes his whole length, bringing her hands up to her chest as she begins to pump up and down. He brings his hands to her hips and help her up-and-down motion, bucking along with the thrusts in growing ecstasy. She grows increasingly loud in her moaning, crying out plights of love as their thrusts go over faster. Both let out an exclamation of their bliss before she collapses onto his chest, fluids leaking out from between them. She whispers sweet things into his ear between their panting, gently petting his hair as she rests her bosom upon his chest.

Clink. The door to the library opens.

“Assistant? You had best not be slacking off again.”

The two are instantly alert, separating themselves in between a tangle of limbs and smells. The woman moves to quickly toss her dirtied underwear into a bookshelf, sliding a pile of books in front of it. He panics before she ushers him down the bookcase lane and to a window leading to the courtyard. He leaps out, becoming stuck halfway through the window frame before she gives a shove onto his bottom and he tumbles out, pants coming further undone. Still, he manages to roll a good distance and break into a jog with his pants around his knees.

She wistfully calls out to the ‘vampire hunter’ as he staggers away, trying to pull his pants on through the courtyard. As she hears approaching footsteps, she quickly closes the window and spins to meet her master.

“Koakuma, were you talking to someone just now?”

I was going to include a line along the lines of "Maybe next time we'll do something *different*", but that would imply that I plan to write more of this. This was... I don't know. I was speaking with a fellow THP author about games and then about a succubi boss then they went to bed then I did this.

It's horrible and the man is uke, why did I write this?


That said, if I was going to write anymore it would probably be related to this picture.

My good sir, I would be pleased to hand the reigns over to you. If you would deign to speak to me on IRC, though, I'd like to chat.
SettingsAppearance [X]